I sometimes feel I don’t get visual enough on this wee blog. So I thought I’d try to raise a Friday afternoon smile from you (I just hit 7 hours with only a short breather, working on this oniony play’s structure/s and need a break).

I’m going to show you my scribbles that have taken me from maelstrom to today’s Draft 1 beat sheet (60% of one, anyway) and 30-odd pages of “usable” text so far.

Exhibit A: some time in March. Was it one play? Was it three? Ummm. Well, this spawned an offshoot, so there’s two in there, at least…. (like those flowcharts? dead easy, great app for messy scribblers like me: PureFlow. Gorgeous.) 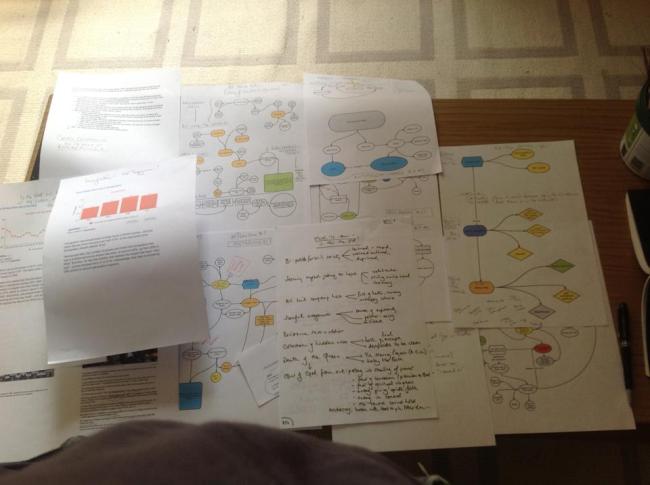 Exhibit B: April. This is all about that man called Bob and his dilemma that I mentioned in yesterday’s post. Peeps who know me and my writing will have heard me blether on before about how I use Buzan’s mindmaps for all kinds of things. This is with a paid version, but you can get free (keepable) downloads from the Buzan website.

Exhibit C: Last Friday. Had some actual text. All very loosely related. Bit of a jigsaw, to be frank. So that’s what I did – laid it out, found what was related, what wasn’t, what mattered, what fell out and where gaps needed thinking about (but not necessarily filling). Deeeeply satisfying and big help in getting rid of the heebie jeebies. You also don’t need special software for this one. It just makes you tidy up. 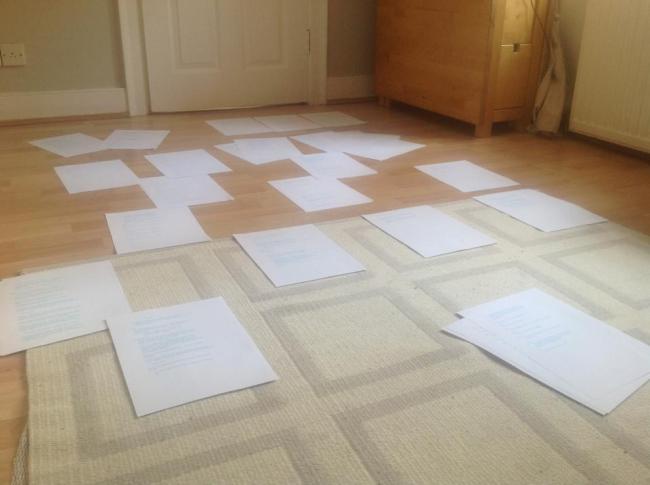 The last one (that “exhibit” thing got a bit annoying): A few hours ago. The play has several inter-connected stories in it (colour coded, no less – except yellow is for 2 different tales, my post-it rainbow being a tad limited). And yes, it’s a woolly spiral. I wanted to see / feel where the resonances between the stories are. Each post-it note is a shorthand for a scene or event, or perhaps just an emotion or comment. The stories grow from the centre outwards. So this is just me testing what might work with telling tales in different orders. Since this, it’s been transcribed, and re-ordered – twice. 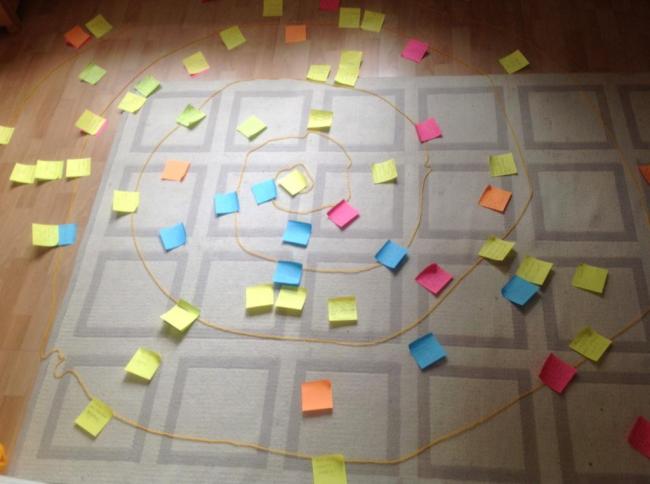 And now I really have to stop so I don’t dream about this stuff. Hope you liked them. TTFN!