Every so often, the arts publications of hither and yon ask me to review a play at the  local playhouses. Here are a few.

I can’t help but think that Mr Pinter would have relished his Betrayal being TRB’s mid-pandemic season-opener. The play is a simple piece of mastery, working backwards and forwards simultaneously, delighting us with that mathematical tickle you get from unfurling a riddle. Conscious and unconscious contradictions abound – a little like the act of theatre-going in October 2020. And – as I said – it is good. (CLICK FOR MORE)

What kind of a playwright rails against language? We writerish types can be splashier with words than a teenage boy and a bottle of Lynx™. In both cases, bystanders gasp for clean air and beg for a little less.

For those of you who need to do some festive skimming: GO TO THIS VERY EXCELLENT SHOW IN BATH BEFORE JANUARY 12.

Now that’s out the way, I can tell you why. Let’s face it, Christmas shows can get a bit formulaic. And while we’re all fond of a bit of festive formula, we need each show to have a special sparkle. That stand-out thing that makes the kids say, “Remember when….?” and ask you to re-enact it for months to come.

Blue Door is a remarkable production. Script, performers, music, setting, lights – all combined by the director – to absorb you whole. It is one of those theatre moments where you utterly vanish as yourself, and enter without question into the world you are offered.

The story – the stories – are of badness. And of good. And of confusion. Centuries of jaw-clenching racism, hatred, fear, abuse and deep, deep pain – of all of these, you will hear. But you will also hear of love. Compassion. Wit. Wisdom. Kindness. And determination.

[…] Ray Fearon plays Lewis, a philosophy of mathematics professor who’s especially interested in the idea of time. He is black. He questions his black identity regularly. He sees his own blackness through white eyes again and again. He is married to a white woman, who berates him – then leaves him – because he did not do what she told him he must: attend the Million Man March (where black men were asked to show commitment to family and community). I told you there was wit. 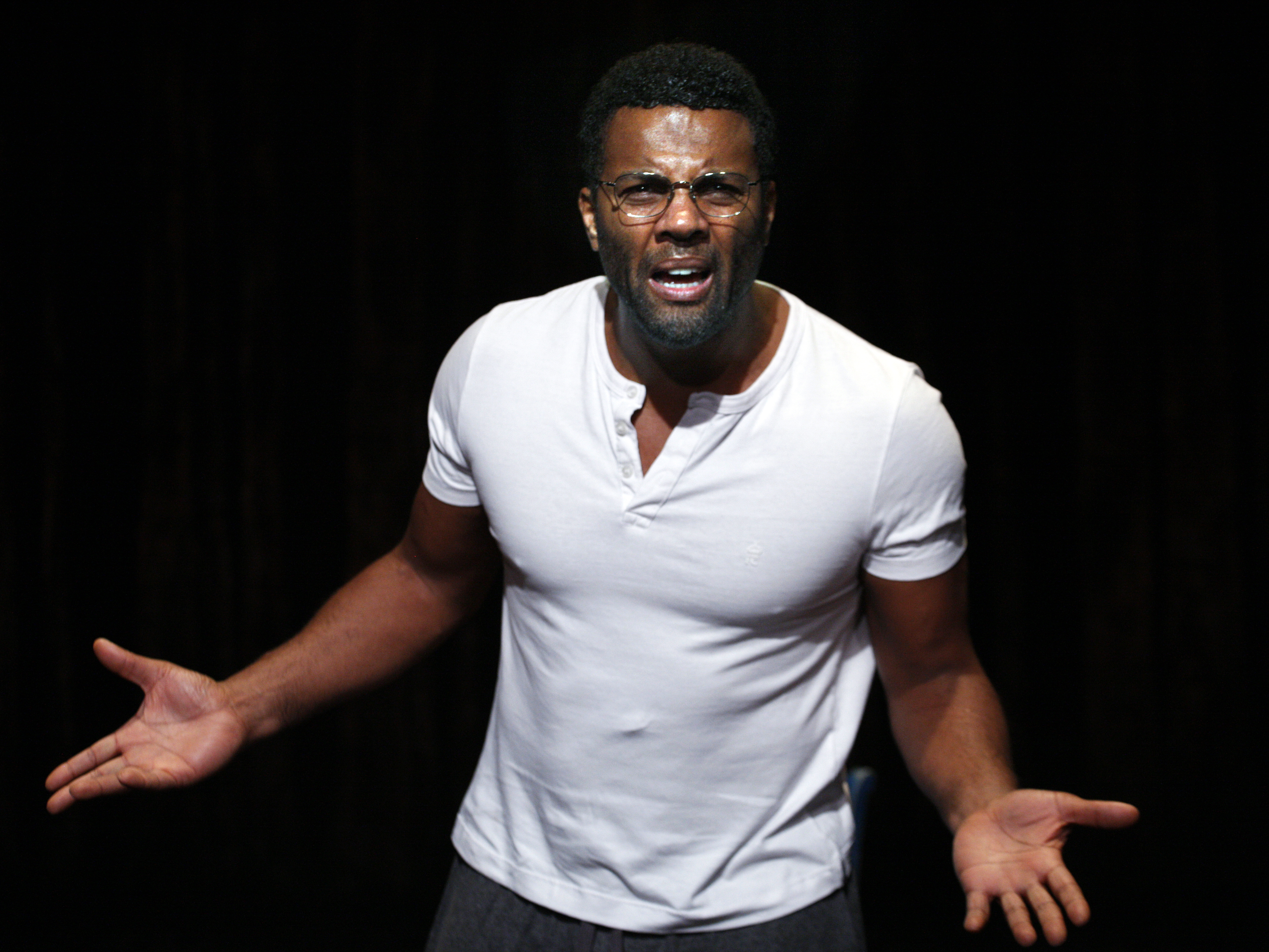 Jewish New Yorkers retire to Florida in the ‘80s. So far, so unremarkable. Except of course, every important story must start with the unremarkable.

What’s different here is not even the nightmare. The difference here is the hand plunged hard and deep to the base of the nightmare’s own psyche, yanking everything from the gut into daylight for examination. Donald Marguilies’ Obie-winning play is no easy watch..(more)

Yep, I’ve been reviewing again. Brilliant way to sharpen the writerly craft (I hope). Sorry to say this isn’t all it could be – running til 1 Sep in Bath, with Downton Abbey’s Phyllis Logan playing Patricia Highsmith, author of The Talented Mr Ripley (and much more):

“….Think of a bar-bore in their own cave and that’s the role Phyllis Logan has taken on. It’s a very tough gig and she too is constantly watchable. But Murray-Smith has not gifted her the same character nuances as her counterpart […] With this uneven script, the audience is left with a sense of dangling threads, of creative promise unfulfilled, and a great writer being under-served for the benefit of a lesser one.”

I was lucky enough to see and review this incredible piece of theatre back in May. Apologies for missing the boat on re-posting my review for Bristol 24/7, but here it is:

As an adult, it is genuinely rare to sit in a theatre and utterly believe. But Shuler Hensley’s performance in The Whale is perhaps the most visceral, convincing, immersive depiction I have ever seen, on any stage. This is one powerful piece of theatre, with award-winning performances from a cast giving their all, in a completely engaging world.

Charlie (Hensley) is not just obese, but morbidly so. The kind of  “What’s Eating Gilbert Grape“ “big” that involves hoists, or windows being taken out. But Samuel D. Hunter’s The Whale is not a play about a man being fat. It’s a play about despair, grief and regret; about self-loathing and a suicidal lack of self-worth. It is one of the saddest and most eloquent plays I have ever come across. It’s a play about love….

Very happy to have reviewed the opening night of posting Letters to the Moon last night as it starts a tour that takes in Wimbourne, Guildford, Chipping Norton, Malvern and Devizes.

Oh, what a lovely, love-filled, heartwarming evening you will have with Posting Letters To The Moon. Opening night at Bath’s Ustinov Studio (Theatre Royal) looked like a full house for this charming legacy of a show.

But where to start? You could come into this piece through so many different doors. A Brief Encounter fan? An Archers addict? Maybe you’re a soul who loves the “letters from” format, or even “an audience with-“? Perhaps you’re an incurable ’39-’45 nostalgiac?

Whichever door works for you, this space is as welcoming and nourishing as you could possibly want. Huge congrats to Lucy Fleming and Simon Williams – and their family – for sharing these letters in such a generous way.  More …

I’ve reviewed the new Daniel Kehlmann show at the Ustinov, Theatre Royal Bath, for Bristol 24/7. In short, this was a tough review – I wish with all my heart I could have written a happier one. Click to have a read

A one-man show running at the Ustinov in Bath til early September. Starring Henry Goodman. Here’s the review in Bristol 24/7.

Alan Franks offers an external drama that is more of a blip than a bomb. It’s a lost opportunity for British theatre when both Goodman and the Ustinov offer such a strong springboard. As it stands, this is a lovely 90-minute show (which doesn’t need an interval to weaken the second half), but it fails to pack its promised punch. Read more…

Hare’s play challenges every orthodoxy: tonight, on the stage, it looks like we’re tucking into establishment Christianity. But in the doggy-bag of meaning we’ll revisit at breakfast, it’s a fetid self-serving of hypocrisy, cowardice and wilful blindness – wherever people are found….

…A gorgeously mischievous poke-in-the-eye play that runs away from you laughing, taking its ball with it after an oh-too-short 90 minutes. ….read more.

This is a very special piece of theatre. It’s warm, entertaining, heart-swelling, cringe-making, shame-facing and packs a hell of a punch, staring 2016 in the face all the way from 1955….read more

The Ustinov’s new American season kicks off with Adam Rapp’s Red Light Winter, a show cordoned off by warnings of its “explicit” nature. Yes, there is nudity and sex but without doubt the real drama comes from the messed up protagonists themselves. Read more…

This is powerful and disturbing, placing a clear trust in the audience to go with their own feelings and opinions and not be spoon-fed. This is not an easy show – as we’re gently warned up-front, it is at times “difficult’. Goode is “not not OK” and remains a theatre-maker who will keep hunting down the god-(less?) honest truth. Read more

In these days of corruption, lust and bloody murder, this spectacular production of old-fashioned hell-in-a-box is definitely one to catch while you can – but certainly not for the faint-hearted: Jimmy Fairhurst’s maniacal laugh will stay with you for years. Read more…

Cynical journo Adam, played beyond-convincingly by Gareth Glen pops into a faith healer’s show to gather ammunition for an exposé. There, he falls bits-first for “fit” Christina, a girl with a deep faith and terminal prognosis, and fails to tell her his true intent. Not only does he fall in love, but becomes convinced that the Devil’s paying back his deceit, big-time – chasing the lovers, in pursuit of Christina’s soul. read more